Apply here!
We are looking to recruit the following
Creeps
Free People
Open 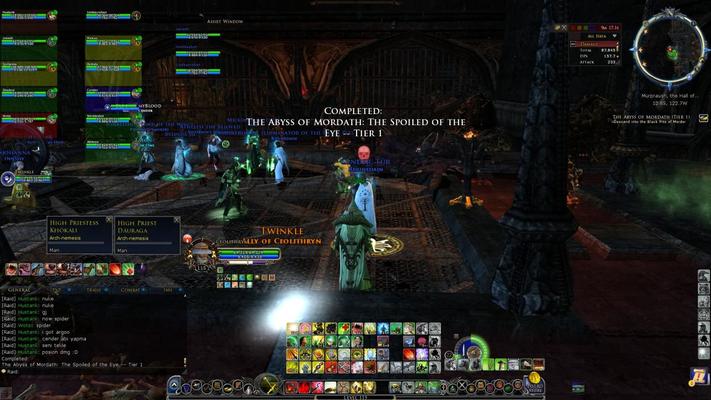 I went into the new Mordor raid The Abyss of Mordath for a first look and explore the tactics. The raid was started by a few alliance friends from the Pipe Weed Smokers and I first joined on my champ Rawin.

Melee only when mits are maxed
After a few wipes at the trash mobs, where my champ died faster than every other raidmember I decided to switch characters to my Loremaster Ceolithryn. This helped the raid and my success as I noticed the outgoing damage debuffs from the Loremaster were really helpful. I tried using some crowd control skills as well but all targets I tried were either immune or being hit with area of effect hits not long after they were CC'd, so after 2 pulls I didn't bother anymore with CC and focused on debuffs and support healing.

Cure wounds pls!
Some things I noticed with the trash mobs was that you should really have an order of killing them and I think with a focused group that is on voice chat it might be a lot less chaotic than it was during this run.
One thing I noticed was that in each fight people got nasty wounds, and if it wasn't a tank and the wound wasn't cured quick it often lead to a death.
So if you happen to venture into this raid, be sure to take loads of Doomfold Healing Draughts with you (thanks Tim for sending me some while I was in the raid!) and make sure you have them on a quick button for usage.

Boss time!
I think there were around 6 or 7 trash pulls before we got to the first boss, which are a brother and sister (Barad Guldur or Lost Temple Flashbacks!) which have to be separated by 2 tanks.
If they get close to each other they heal each other real fast. During the fight a few mini-bosses will spawn which from what I noticed (on T1) can be killed without consequences.
During the whole fight there will spawn small red dark waters who cannot be agro'd or CC'd. These Dark Waters can be ignored (on T1) to a certain end. You will have to pay attention to those that come close to you and start an induction, as while they are doing the induction they do really nasty aoe damage. Just keep an eye out on your health if you're not the tank and if you are hit with 10k+ hits you should move asap. Preferably would be of course watching the Dark Waters and avoid being hit.
Another thing that happened was that sometimes someone got an Eye debuff which counted down and once it ran out, you got ported to the altar in the middle of the room. I got ported 3 times in our 4 tries, two of those times I was able to run of the platform straight away, the other time I was stuck on the platform and died almost instantly.. I wasn't sure why that happened.
And the last thing I did not understand in this fight was that we got some "devoted" adds that spawned and just walked up to the altar and died.. they couldn't be CC'd but they didn't do any damage either, there must be some tactic with them but I didn't see anything yet.

We got 3 mini-bosses in this fight, a Stone-hide, an Ent and a Spider. The Stone-hide was the first and we killed that quick. The Ent and Spider spawned later on in the fight, I missed if they came at the same time or separate. We did have the spider get stuck which was helpful but not intended I guess. We killed one of the bosses before we killed the Ent, then we killed the 2nd boss and last we killed the spider as that was stuck.
We tried several tactics but the simple group 1 hits boss A and group 2 hits boss B worked the best. I think the hardest part here was keeping track of the Dark Waters and not getting unwanted deaths from them.

The trash mobs from boss 1 to boss 2 seemed a lot easier that the ones from the start up to boss 1 but that might have been my interpretation..

Wardens are overpowered
The 2nd boss needs some other nice strategies which I think will be doable once we practise a few times, it has a lot to do with corruption removal and cloud placement.. oh and of course wound removal!!
He's some sort of warden type enemy with 20 million morale, he has to be tanked in Melee range, if you get agro and you're far from him he throws a javelin that hits up to 110k. It seemed he places a wound on people that are close, like the warden light damage wounds.
During the fight adds will spawn, if they get killed they spawn 2 ghosts which in their turn spawn a deadly puddle when they die. Not sure if the adds have to be killed or if they can just be tanked/dealt with while focusing on the boss.
Oh and also the walls with shadow will creep closer during the fight so you'll have to move the boss accordingly.

So far my write up of my first steps into the new raid, it feels like a nice raid, shame it's only 3 bosses.

Advice I have for people that want to gear for these fights is this:
2 Likes
Share

Curufinne 2y ago
nice read mate like you say with a focused team and voice may be a bit easier but only time will tell maybe if pipes have a few ppl wanting to try it and we can get 6ish ppl on we could share discord details with them to try it until we get the bodies :)
1 Like

Thranthir 2y ago
Yeah sharing discord with them is fine, Nim is already in there 😉
0 Likes
Page 1
10:54
GMT
There are no upcoming raids