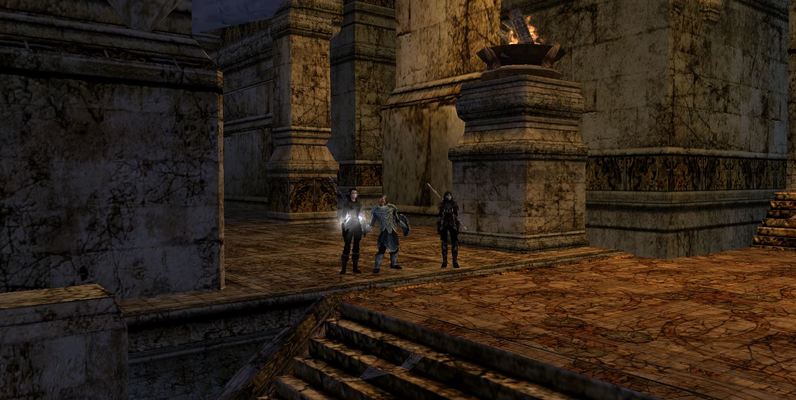 Screenshot of the Week
The screenshot this week (above) is Lewis, Hari and Juls after a t3 Narrowcleave run.

We invite you all to submit your screenshot. A place, your character, a costume, whatever you want. Please send your screenshots to Juls through Discord message.

New Members
Please welcome Curassael into the kin. A level 16 Burglar that joined us on March 23rd.

Server Events
The Spring Festival is now live and runs through until 7th April.
+25% gain on embers/motes/figments from March 25th until March 29th.

Kingratulations
Congratulations to Lewis, Hari and Juls on finishing the t3 run, Agoroth, The Narrowdelve and obtaining the title – Led the Charge at Agorath. Well done folks.

Patch Notes and Updates
The was a patch to the game on Wednesday March 25th. The notes can be read at the link below.

Quests and Adventure Areas
• Fixed Tom Bombadil's size in "The Woe of the Willow".
• The cooldown of Gulmúk Dampmould's skills has been slightly increased.
• The yellow eye effect from Gulmúk's Corrupted Pool effect has been removed.
• The quest "Cultivating the Wildwood" no longer requires "Retribution of the Trees" to have been
completed.
• Thornmane now has the ability to grant side quests if his main quest lines have advanced.
• Fix issues with Thornmane and Minda phasing at the wrong times.
• Minda Heathertoes will no longer give two quests at once and then vanish, making turn-in impossible.
• All Wildwood Hoppers are now able to be collected. Happy hunting!
• The quest "Punishing the Poachers" now has a shorter respawn time.
• The NPC Laugi will stick around to bestow "Clearing Enemies in Zarkul-sulûn even if "Scouting for the
Scout" has been completed.
• Farewell to TBD BRAWLER, who was entirely too eager to see Trader's Wharf.
• Non-physical ruins in the Weather Hills now have their proper physics.
• Fixed a floating edge of the shipwreck in Forochel.
• Corrected a texture issue in Cirth Ungol.
• Placed a missing post in the Kingstead Meadows neighborhood.
• Grounded floating ballistas in South Ithilien.
• Corrected a rock placement issue in Wildwood.
• Fixed an issue where a resource node was not displaying corectly in Malenhad.
• Corrected stuck spots in Erebor and Glimmerdeep.
• Corrected a terrain issue along the water's edge in Ered Mithrin.
• Landscape treasure chests in Minas Morgul have had their respawn timers set to be in-line with other
landscape chest spawns.
• Enemies in The Circle of Sorrow are no longer trapped below ground.
• Fixed a radar issue in Celondim.
UI
• New UI animations released in Update 29 for active abilities in the quickslot bar have been reverted for
now. In the future, we intend to make a toggle available for players to select between the older UI
animations and our newer UI animations.

Don’t forget to check out Gaz’s stream on

Page 1
10:05
BST
There are no upcoming raids
There are currently no polls set to the side block