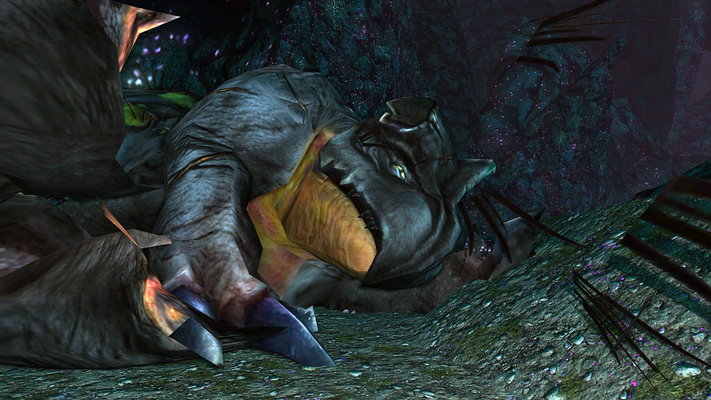 Welcome to the Newsletter

Screenshot of the Week
The screenshot this week (above) is of aGiant Cave Claw sleeping somewhere under the Mountain of Gundabad. Submitted by Bas.

New Members
There are some introductions to new members/alts this week. Please welcome . . .

Kin Events
The kin is currently progression runs for t2 AD, Remm and FoKD for players that reach level 140.

Please see our Discord #Instance-announcement channel. Please also visit and vote on our member polls for a classic instance/raid run at the link below (see Polls on the right hand side).

Patch Notes, updates and Articles
There was a patch on December 3rd. Please see the link below for patch notes.

Further still are some incoming changes that have been listed on Bullroarer for the near future. Please Note** Bullroarer notes are always subject to change Please see the notes below.

Adkhât-zahhar, the Houses of Rest
"Deep in the Pit of Stonejaws, a grand tomb holds the remains of the many ancient dwarf-lords of Gundabad. The necromancer Loknashra, now empowered with the spirit of Drugoth, has returned to raise an army and claim her vengeance upon all those who wronged her."

This is a new, 6-man Instance in Gundabad.
Tiers 1-3 are open for testing
The Discovery deed has been bypassed for this beta.

Release Notes - Beta #1 (Apologies if any of these notes list issues that have gone live already):

The following housing decorations are now correctly classified as furniture, and can be placed in a furniture or yard housing hook: Purple Fungal Bush, Pink Fungal Bush, Dark Green Fungal Bush, Light Green Fungal Bush, Pink Fungal Grass, Light Green Fungal Grass. If you have already placed these items in a wall hook, you will need to remove them and place them in an appropriate furniture or yard hook.
Gundabad Rewards: Additional Cosmetic Rewards have been added to the following Gundabad barter vendors: Zhélruka Allegiance, Geode Hunter, and The Honoured and Celebrated Tiers of Reclaimers of the Mountain-hold.
Small and Large Yard Hooks have been consolidated into a single Yard Hook type.
Gundabad Crafted shields now crit and achieve the correct ilevel.
Renaming crafted light armour pieces that were using misleading item names.
The Brawler Pugilist gear set now properly requires minimum level 60 to use.
The following old LI items can now be deconstructed for Ancient Script: Title Bestowers, Crystals of Remembrance, Scrolls of Delving, Scrolls of Renewal, Scrolls of Empowerment, Legacy Replacement Scrolls
Fixed tooltip names for 'Ignore Pain' tracery.

PvMP Gear will now be unequipped after leaving the Ettenmoors.
Lugazag will now spawn the appropriate keep commanders when flipped.
Defiler Plague of Flies now restores power correctly instead of draining it from the defiler.

Clovengap - Instance: Corruption's Source intro text will no longer be underlined and intro name will display properly.
Quest Guide updated for Legacy of Durin Chapter 10.2.
Geodes have been renamed to improve sorting in the Barter Wallet.
Quests: Additional Gundabad quest instances have been added to the Gundabad Reflecting Pool in Steepset.
Quests: Agátur has a new Gundabad endgame quest 'Reflections on Gundabad (Daily)'
Clovengap, Gundabad - Quest 'Corrupting the Deserters' will now grant the proper reputation and rewards.
"A Festive Flurry" quests now require 4 completions of the daily quest "In the Spirit of Yule" down from 5.
Quests: Searching For Treasures - It is now slightly easier to obtain Dwarf-made Treasures when searching chests and corpses in Gundabad.
Quests: Gundabad Missions: Mission chests now have a chance of dropping a Relic of Gundabad barter token.
Many z-fighting issues in Mattugard and Deepscrave have been resolved.
"Soft Physics" spots in Mattugard and Deepscrave have been resolved.
Physics and Deco issues in Gazat-fark have been resolved.
Opening the map panel while in Stoneheight will now show the Northdowns map
Gundabad - Clovengap - Quest "The Broken Benches of Danakh-Khej" - the discovery zone for the park has been expanded.
Mission: Servants of Throkhar - Uknad, She Who Feeds now resets if she falls into the pit.
Slow travel from Steepset to Fellgat no behaves as expected.
Stuckspots in High Sundergrot have been fixed.
Floating debris in Writhenset has been grounded.
The effects of Múta's "Tenacity of the Dwarves" buff have been decreased.
Fishing: Fishing is now available in the waters of Gundabad.
A stray dwarf deep beneath Gundabad has been removed.
Quests: Thyfli in Clovengap will no longer unintentionally fall through the floor.
Deeds: The Deeds of Gundabad deed will properly update now if you've completed the Deeds of Stonejaws deed.
Reduced morale regen rates for 131-140 by about 25% - they were somewhat inflated due to changes made to the base player vitality rates for Gundabad.
The door to the library in "Assault on Dhúrstrok" is now closed until you find Náin.
Reclaiming the Mountain-hold (Weekly) now awards Embers of Enchantment.
Challenges of Gundabad (Weekly) now awards Embers of Enchantment.
Brawlers should now properly be able to advance 'Instance: A Need for Words'
Gundabad, Clovengap - Quest "Clovengap Mist-walkers" - Nosni will no longer vanish on players who are working on "Matters of Hunt and Heart".
Removed all IA vendors from skirmish camps, as they no longer serve a useful function there.
Sage of Moria now offers a single chest that combines most of the non-IA rewards the three boxes previously did - there was already a lot of reward crossover between these boxes, so it made more sense to combine them after the relics were removed.

Special deals each week in December!
This week, get:
75% off the Keepsakes of the Grey Mountains Bundle
50% off High elf
35% off Tracery Reclamation Scrolls
Now through December 9th.

Streams
Don’t forget to check out Gaz’s stream on

Page 1
05:10
GMT
There are no upcoming raids
There are currently no polls set to the side block